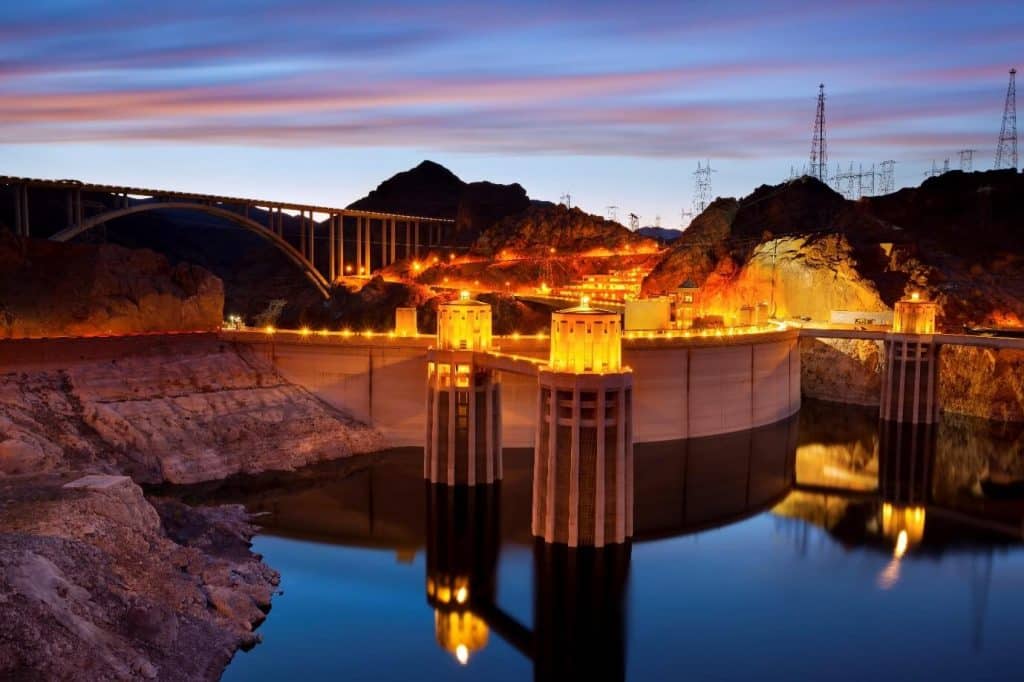 The Hoover Dam has been written about hundreds of thousands of times. But it is not until you see it from the sky, that you get a true representation of just how man can change (with relative ease) the face of the earth for its own good. The dam is located on the Colorado River, the same river that gives us the Grand Canyon, in Black Canyon and it neatly sits between two states – Arizona and Nevada.

Construction started in the midst of the Great Depression in 1930 and was completed in 1935. At this time, the Hoover Dam was the largest electric-power generating site and largest concrete structure in the world -although one could argue there is concrete in the Great Wall of China. Nevertheless, the Hoover Dam has since been surpassed by other dams and concrete constructions, but it is still one of the largest dams in America standing 726 feet high (221m), 1,244 feet long (379m), and weighing an impressive 6.6 million tonnes. The Great Pyramid weights almost the same as the Hoover Dam -just to give you an idea of the scale.

So, despite wrecking the beautiful landscape that was once there, the Hoover Dam has been very successful in accomplishing the jobs it was initially built for including flood prevention and irrigation. We could say the same of countless other man-made structures that seemingly have shown no respect for whatever was there previous. But you as an individual must weigh it up. Is it better to have a wild river that floods from time-to-time flowing down through beautiful canyons unabated by man’s touch?  Or would you prefer a structure that is instrumental in providing water to over 25 million people in the southwest United States, not to mention, the irrigation aspect has enabled farming to take place in a region that was far too dry previously to effectively grow and feed a significant population.

Overall, the Hoover Dam has been an extremely beneficial engineering project and is the main proponent behind the growth of the region in which it is located. So what is the dam’s main use? 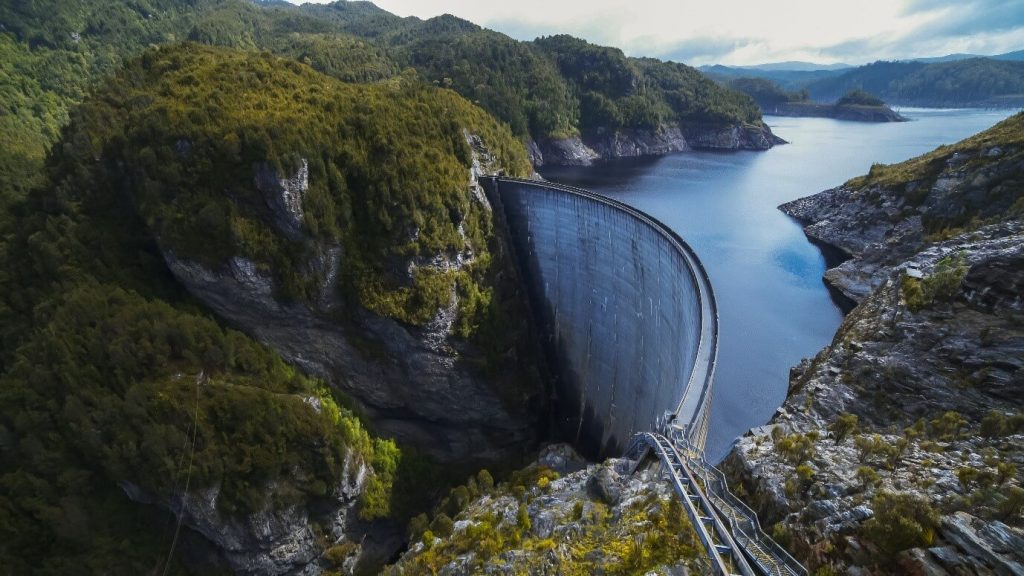 Unfortunately, we have seen the use of hydropower peak and diminish over the last 70 years. For mankind the idea of using water for power generation goes back thousands of years and has feed and given power to many generations of people. A hydropower plant like the Hoover Dam is basically an oversized water wheel. More than 2,000 years ago, the Athenians and the Spartans used a water wheel for grinding wheat into flour. These ancient water wheels are like the turbines of today, spinning as a stream of water hits the blades. The gears of the wheel ground the wheat into flour. 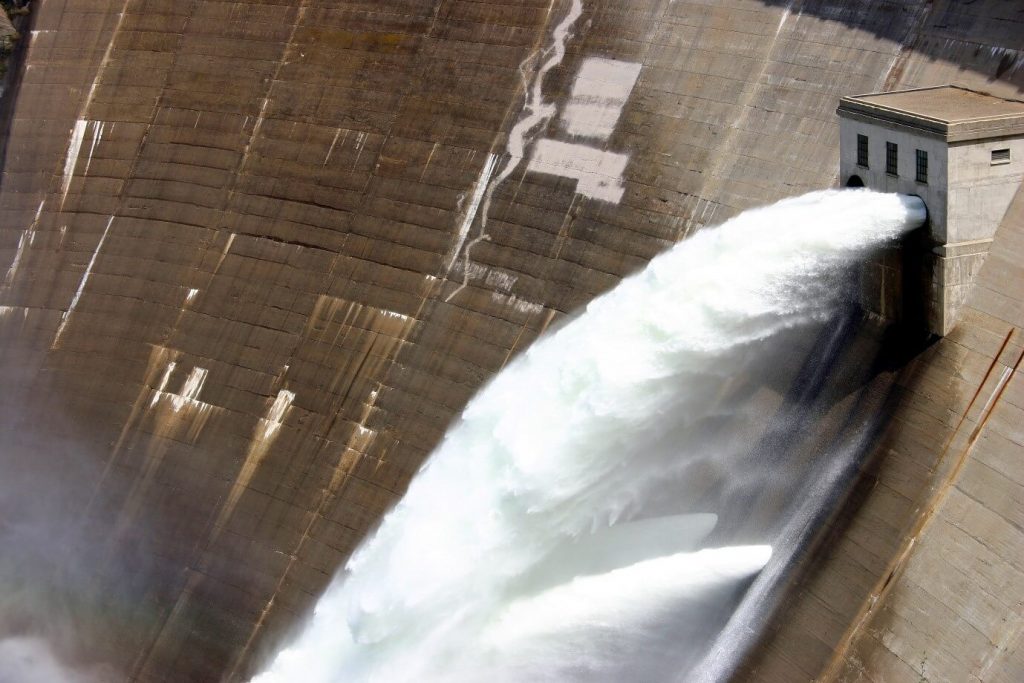 Worldwide, hydropower plants produce about 24 percent of the world’s electricity and supply –that’s more than one billion people with power. But this is going down every year as newer, smaller and more efficient renewable energy is being concentrated on. The world’s hydropower plants output a combined total of 675,000 megawatts. What’s a megawatt you may ask? Well, when converted, it equals the energy equivalent of about four billion barrels of oil. There are thousands and thousands of hydroelectric plants all over the world. Mostly in places with lots of mountains.

Right now, in Australia, Snowy 2.0 (which Danterr is very excited to be partnering with) is bucking the trend and will be one of the biggest hydroelectric plants when finished. It is costing $4.5 billion – an amount you may argue would be better spent on solar energy but unfortunately the sun shines in the desert where no one lives, highlighting that we are yet to develop the technology to get this energy to where it is needed. A square kilometre in Western Australia covered in the latest solar paint or tiles, in one hour, could generate enough power for Australia for one week. Hopefully one day we will see this.

Falling water creates energy and thanks to the hydrologic cycle that creates the water flow, we can count on this every day. When watching a river roll by, it’s hard to imagine the force it’s carrying. If you have ever been white-water rafting, then you’ve felt a small part of a river’s power. As the river is forced through an opening, its flow quickens. Floods are another example of how much force a tremendous volume of water can have. But we will tackle the topic of floods another day in the Danterr blog.

This water cycle is what makes a hydropower plant the simple option. They would be the perfect sources of renewable energy if we didn’t have to demolish beautiful features of the earth to get them going.

Hydropower harnesses water’s energy and uses simple mechanics to convert that energy into electricity. Hydropower plants are based on the simple concept of gravity. Isaac Newton once said after gravity, everything else in life is optional. Hydropower takes advantage of water flowing through a dam, which turns a turbine, which turns a generator. The same way electricity has been made since this humble authors hero Michael Faraday -who worked it out 220 years ago.

So, Break it Down…

Here are the basic components of a conventional hydropower plant –

Intake – Gates on the dam open and gravity pulls the water through the penstock, a pipeline that leads to the turbine. Water builds up pressure as it flows through this pipe.

Turbine – The water strikes and turns the large blades of a turbine, which is attached to a generator above it by way of a shaft. At the Hoover Dam, a turbine can weigh as much as 172 tonnes and turn at a rate of 90 revolutions per minute (rpm), which is taught on the official tour of the Grand Canyon.

Generators – As the turbine blades turn, so do a series of magnets inside the generator. Giant magnets rotate past copper coils, producing alternating current (AC) by moving electrons. A whole blog could be written about how generators work, but they will be summed up a bit later.

Transformer – The transformer inside the powerhouse takes the AC and converts it to higher-voltage current.

Power lines – Out of every power plant come four wires: the three phases of power being produced simultaneously plus a neutral or ground common to all three.

Dam – Most hydropower plants rely on a dam that holds back water, creating a large reservoir.

The water in the reservoir is considered stored energy. When the gates open, the water flowing through the penstock becomes kinetic energy because it’s in motion. The amount of electricity that is generated is determined by several factors. Two of those factors are the volume of water flow and the amount of hydraulic head. The head refers to the distance between the water surface and the turbines. As the head and flow increase, so does the electricity. The head is usually dependent upon the amount of water in the reservoir.

Hydroelectric power plants, nor wind farms, nor electric motors of any kind can work without a generator. Most hydropower plants have several generators to make use of the huge plots of land they need to generate the most electricity.

The generator, as you might have guessed, generates the electricity. The basic process of generating electricity is to rotate a series of magnets inside coils of wire. This process moves electrons, which produces electrical current. 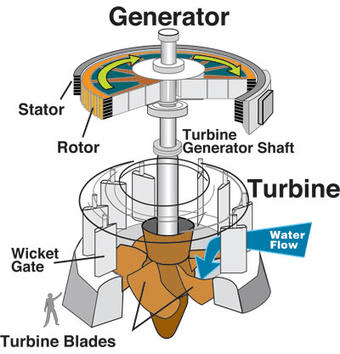 The Hoover Dam has a total of 17 generators, each of which can generate up to 133 megawatts. The total capacity of the Hoover Dam hydropower plant is 2,074 megawatts. It is impossible to calculate just how much power this is, but before the Hoover Dam a package of land about as big as South Australia was inhabitable, and it now is home to a population greater than Australia.

As the turbine turns, the excitor sends an electrical current to the rotor. The rotor is a series of large electromagnets that spins inside a tightly-wound coil of copper wire. The magnetic field between the coil and the magnets creates an electric current.

In the Hoover Dam, a current of 16,500 amps moves from the generator to the transformer, where the current ramps up to 230,000 amps before being transmitted.

It Stays the Same

There is always basically, the same amount of water on the earth. Hydropower plants take advantage of this naturally occurring, continuous process, that causes rain to fall and rivers to rise. Every day, our planet loses a small amount of water through the atmosphere as ultraviolet rays break water molecules apart. But at the same time, new water is emitted from the inner part of the Earth through volcanic activity. The amount of water created, and the amount of water lost is about the same.

Water can come in three forms. It can be liquid, as in oceans, rivers and rain, solid as in glaciers and gaseous, as in water vapor in the air. Water changes states as it is moved around the planet by wind currents. Wind currents are generated by the heating activity of the sun. Air-current cycles are created by the sun shining more on the equator than on other areas of the planet.

The Earth’s water supply through moves through a process day in, day out – it’s called the hydrologic cycle. As the sun heats liquid water, the water evaporates into vapor in the air. The sun heats the air, causing the air to rise in the atmosphere. The air is colder higher up, so as the water vapor rises, it cools, condensing into droplets. When enough droplets accumulate in one area, the droplets may become heavy enough to fall back to Earth as precipitation. This is not what evens up the score; everyday somewhere on earth water spews out of a volcano. This, together with rain replaces that water that is lost to the sun’s baking of our oceans. This is a finely balanced system that we don’t want to lose, because if the sun gets too hot – more carbon Dioxide in the air, not letting the heat reflect out of our atmosphere, then much more water will be lost than can be replaced. 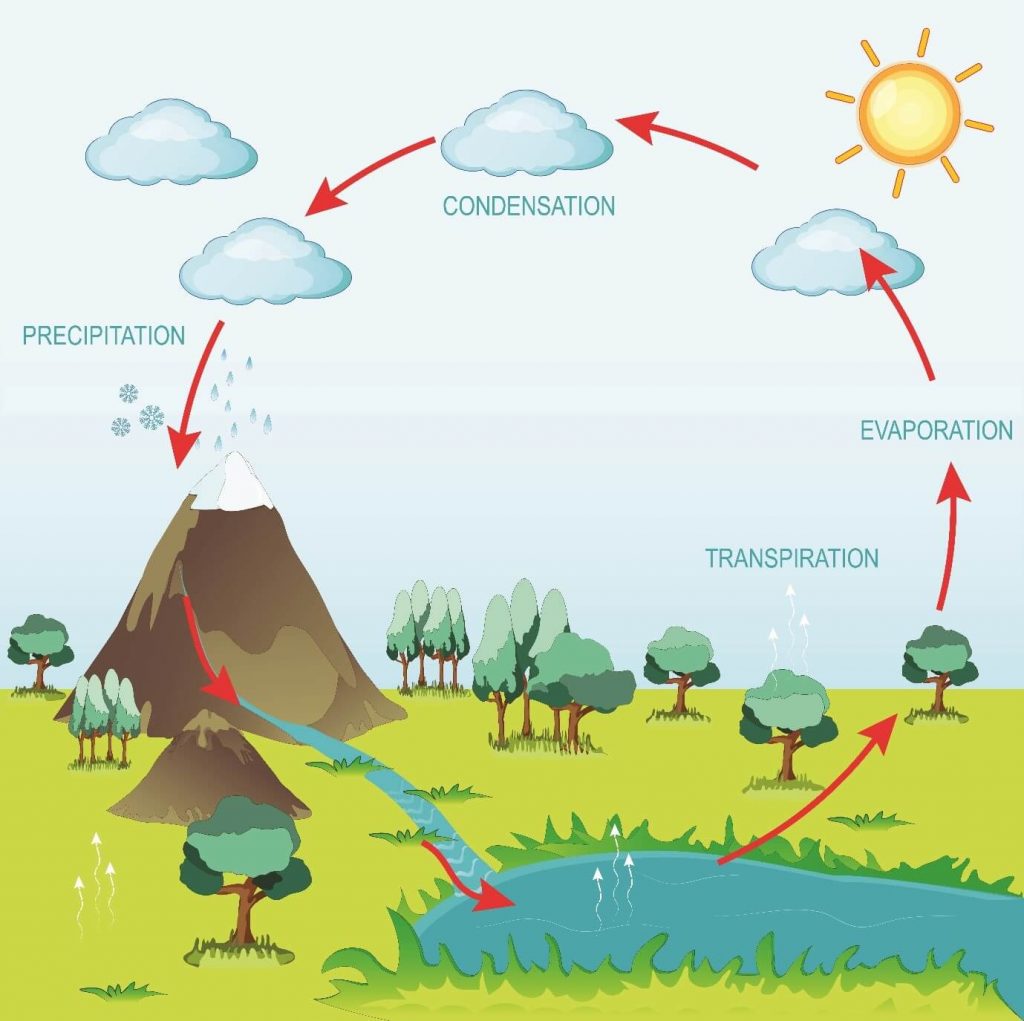 Why Does That Matter?

The hydrologic cycle is important to hydropower plants because they depend on water flow. If there is a lack of rain, water won’t collect upstream. With no water collecting up stream, less water flows through the hydropower plant and less electricity is generated. This is evident at the Hoover Dam. Look at the below photo. See the white residue in the reservoir behind the dam? That is where the water level was 20 years ago. 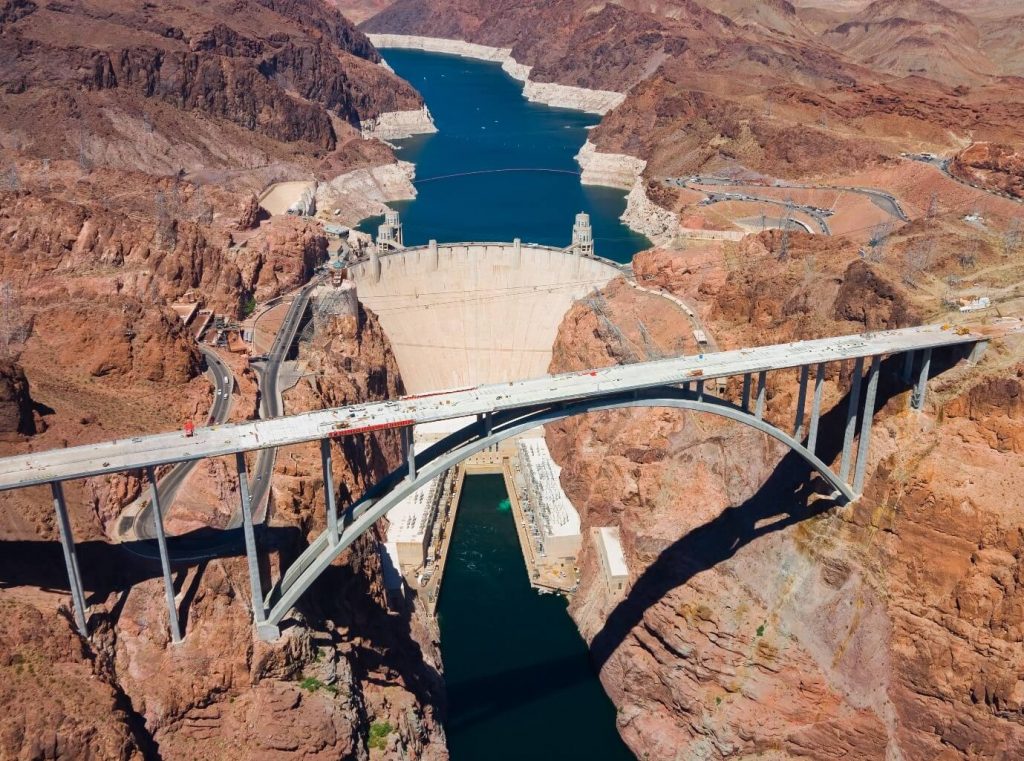 So where do we sit? Obviously, Hydropower is still important, but it is getting used less and less and we are left with thousands of useless dams that have wrecked earth’s natural habitat. The one thing we can guarantee you, is that if a dam is built and Danterr are involved like Snowy 2.0 or the series of dam in mid-northern Queensland currently under construction, they will have spent millions surveying the environmental impact, and if they are partnered with us they will only be getting the best products (like the ones below).

All Dams need Hydrotite, so just click the word and learn about this amazing waterstop.

Dams to guarantee their longevity and soundness with benefit from Zemdrain.

And to finalise this discussion, we at Danterr are continually building our Eco-Friendly range, so whether it be fibreglass reinforcement or toxin free concrete wash, we are offering Australia’s hydropower constructions the safest and best products. Give us a click here to see more of our Eco-friendly range.

So where do you sit?

For more information on Snowy 2.0 or the Rookwood Weir Project, which are Australia’s two biggest hydropower projects at the minute, just give them a google or a click in the above paragraph.

If you have a major opinion on anything written above, please contact zeb@danterr.com

Have a nice day.