‘Give me a lever long enough and a fulcrum on which to place it, and I shall move the world.’

This quote comes from a man named Archimedes, a Greek mathematician, physicist, engineer, inventor, and astronomer who lived in the 3rd century BCE. Archimedes discovered a way to measure the volume of things with an odd shape by using water displacement. He then theorised that he could move anything of any volume, especially through water, if he had enough leverage. Archimedes, then built a pully system and in front of the tyrant King Hiero II of Syracuse, he pulled a ship out of water single handily. After this achievement Archimedes had the reputation of the greatest man of science of his time, and from here he got a bit cocky and uttered the above quote – his most famous legacy.

It is not surprising that after demonstration of what he was capable of, King Hiero II of Syracuse commissioned Archimedes to design a huge luxury ship for Royal travel. Remember this is 2530 years ago. Ships in antiquity were not leak proof, and for a ship as huge as the King wanted, Archimedes had to invent a way to pump out water some 2.3 millennia before British scientist Michael Faraday invited the electric pump! Archimedes came up with a device that entailed a revolving screw-shaped blade inside a cylinder. It could be turned by hand and transfer water from the belly of a ship back into the ocean. Eventually Archimedes used this device to pump a low-lying body of water into irrigation canals. This device is still used today for pumping liquids and granulated solids such as coal and grain. It was also the first screw. The tiny little things we used every day, was first devised to pump water out of a ship!

By the late 17th century Jesse Ramsden, a British engineer, had a reputation built on the engraving and design of dividing engines which allowed high accuracy measurements of angles and lengths in instruments. This included the perfection of everyday screws.

Yes, firstly Archimedes, and then Jesse Ramsden pioneered the screw, but in 21st century screws have made a quantum leap and now can be used to anchor things to solid concrete! We can now attach almost anything to concrete… a pipe dream to the likes of the above two mentioned visionaries. Think of the applications… in theory, if pirates of the past didn’t use ships, but instead used high rise building as their headquarters (this is of course just brainstorming!), they could have drilled a plank into the 22nd floor and made ‘walking the plank’ much more frightening! 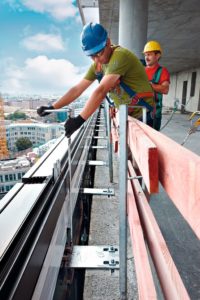 At Danterr screw-type anchors that are used in solid concrete applications come in zinc or galvanised form. Fixing things to concrete is achieved by simply screwing the anchor into the pre-drilled hole. As the bolt is screwed in, it creates its own undercut by tapping the concrete hole using specialised thread indentations. In addition, serration on the underside of the flange head gives superior grip to the anchor point; there is no expansion, only a cutting and locking mechanism. 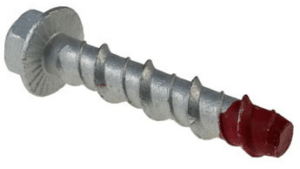 This is trade talk for basically saying ‘use a proper Danterr supplied drill bit to drill a hole into your concrete, then use our screw bolts as you would any other screw, and what you are attaching to concrete will be ingeniously anchored to the concrete.’ Easy! 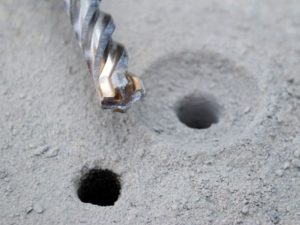 These screw bolts won’t force concrete expansion thus enabling smaller distances between required screws. They can be installed by anyone who has ever used any type screw before, and too removed at any time. The screw bolts are incredibly strong as of course they need to be considering what they do. And they come in a huge variety of lengths and diameters. 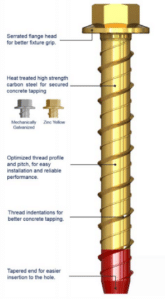 Whether you need 400,000 of these remarkable inventions to attach a terminal to an airport; or you are attaching a statue of a sporting great to the grounds surround a stadium and need 400. Or even if you are a Dad and need four to attach a pole to your driveway to build a basketball hoop for your kids – Danterr is your destination for all instruments that attached to another object by an incline plane wrapped helically around an axis… which is how Archimedes would have described, well… a screw!

Enquire now no matter what size or how many screw bolts you need! 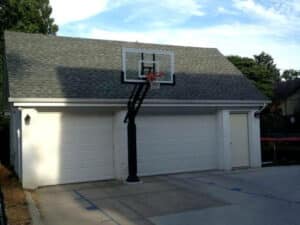