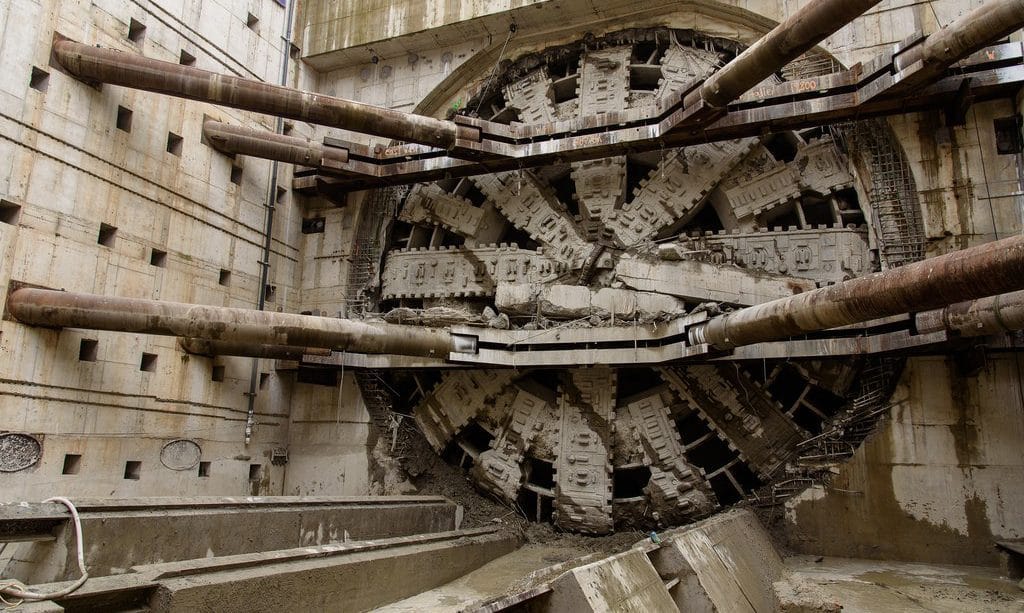 The first week of December is International Tunnel week, so at Danterr, we put our heads together, did a bit of research, and here is what we have come up with regarding our favourite / most inspiration tunnels ever built. Companies all over the world take inspiration from each other when trying to make the most revolutionary tunnels they possible can. At Danterr we love tunnels, and because we have the products to hold them together, we are forever researching tunnels and tunnel construction.

Enjoy the below blog / countdown!

The Laerdal Tunnel in West Norway is the longest road tunnel ever built at 24.5km, but it only cost $153 million! That works out at just which $6,250 per meter. Very cheap / efficient. Because of the sheer length of the tunnel, engineers had to include various features designed to alleviate claustrophobia and tiredness. The tunnel takes 20 minutes to drive through, which had led to innovations in the use of behavioural science and driver psychology in the design to reduce driver fatigue and improve safety. This is ingenious by the Norwegians and the major reason this tunnel gets into our top five.

So what mind tricks were used to keep drivers concentrating in this extraordinarily long tunnel? Large, colourfully lit caverns every six kilometres that provide points of interest and a unique driving experience is the answer!

Engineers separated the tunnel into different sections to give the illusion that drivers are traveling through several smaller tunnels. In these smaller sections, drivers can take breaks. Very cool. 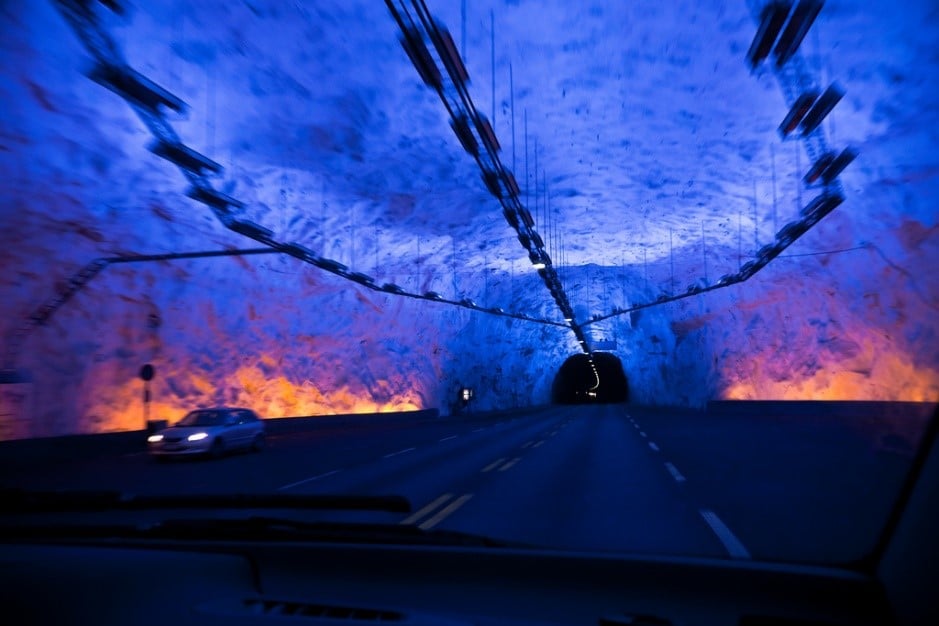 The Eisenhower Road Tunnel in Colorado is located 3,401 meters above sea level in the Rocky Mountains. This is the highest point on the U.S. interstate highway system.

This brilliant tunnel played a unique role in the women’s rights movement when a construction worker named Janet Bonnema was hired to work on the project in 1972. Apparently, Janet’s supervisor misread her name as James, but realised his mistake and because it was 1972, reassigned her to administrative duties. Bonnema sued, and won, and was allowed to return to the tunnel. A new equal rights law was subsequently passed. That fact as well as the fact that this tunnel is named after one of the most popular Presidents of any Liberal Nation ever, is the reason it squeezes into Danterr’s top five despite its length of just 2.72 kilometres

Legend (the internet!) has it… that before the tunnel’s official opening in 1972, a drunk driver felt the need to be the first person to take a vehicle through. He made it, but was pinched for trespassing, but got off because the there were no signs preventing traffic, despite the tunnel clearly not being opened, and a huge opening ceremony being planned for the next day! 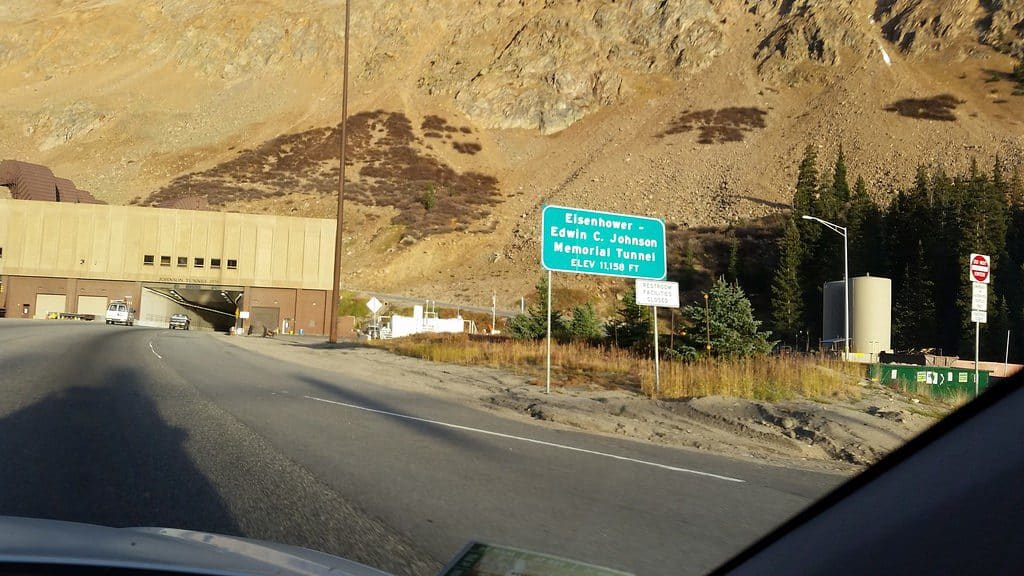 This famous tunnel connects England and France – two Nations that were at war for the best part of 1000 years! The tunnel of Chunnel as it is known, has the world’s longest undersea section – 37.9 kilometres.

Though a marvel of the modern age, it wasn’t a new idea when it was built. French engineer Albert Mathieu proposed a tunnel under the English Channel in 1802, although his plans included an artificial island mid-channel where horse-drawn carriages could make maintenance stops. Construction evolution moves very quickly when you think about it.

The tunnel is 50km long, and although both the English and French put in work to build the Channel Tunnel, the English side tunnelled a greater distance. It seems the English still wanted the upper hand over the French despite both nations working on the same project!

It is easy to mistake this tunnel for a bridge because is includes a bridge of 4.4-kilometres in length as well as a 9.6-kilometer subsea conduit.

The Aqua Line crosses Tokyo Bay and connects the cities of Kawasaki and Kisarazu. It reduced the journey time between the two from 90 to 15 minutes. Almost 50 million people live in this area. This project required the world’s largest undersea tunnel boring machines and set the precedent for constructing two-lane road tunnels. During the third biggest ever recorded earthquake in 2011, this Bridge / Tunnel structure held firm thus demonstrating the resilience of the construction. The tunnel / structure is 14 kilometres long and includes an island that functions as a rest area and mall. The man-made island is a popular scenic point with an observation deck that gives a great view of Tokyo Bay.

To start with… 3,900 kilometres of copper cable was used in this tunnel’s construction. That is enough cable to stretch from Sydney to Perth!

In Europe, and especially in the dead centre – Switzerland, driving or catching a train around mountain ranges trying to get from A to B would be made easier in an almost unquantifiable way if you could simply go through the 50km x 50km base of a mountain, rather than the 900km around the range. A previously 900km journey, is now just a 50km trip thanks to the Swiss Gotthard Base Tunnel… the below video explains just why we have chosen this tunnel as our number 1 at Danterr…

Now, should you be reading this and be in the tunnel construction business, Danterr is company for you!

No these are not chairs for the workers to sit on during smoko, but rather a support product that holds the mesh / bar both of fiberglass (which we can supply by the mile load) and iron in place, thus allowing the slab on the bottom of the tunnel to be poured in a more efficient and stronger fashion. It is a no-brainer to make the slab on the bottom as strong as possible and using a few thousands of these little plastic contraptions helps that come to fruition.

Does anyone, say over the age of 40 remember, up until around 1997, that man couldn’t venture down to see the wreck of the Titanic first hand? This was because the technology of the time couldn’t keep the water out of the submarine that was being forced through the walls due to the pressure of deep-water submersion. Eventually, engineers worked out how to make submersible craft as small and compact as possible, with different materials to the standard iron and steel that submarines had always been made of.

Unrelated, but fascinating all the same, is the fact, that for a few hundred thousand dollars, anyone can now take a tour of the Titanic wreck site, some 13,000 feet below the surface of the North Atlantic!

Back on point – The same science that allows seeing the Titanic with your own eyes applies to keeping the water pressure generated by billions of litres of water out of a tunnel. This water is being forced into the tunnel by the phenomenal forces of nature but needs to be held out. Hydrotite is a simple rubber product that provides maximum seal between joints in concrete. If the water is going to rush in, it will start at the concrete joints, and Hydrotite, when inserted into these joints, makes them infinitely stronger, effectively sealing them.

And finally, there is tie wire. Next time you are driving through a tunnel, be sure to keep your eyes on the road, but have a quick think about 1.5mm thick wire that is above, below and on each side of you… kilometres of it. Wire that if it was not used, would make your drive ever so slightly more likely to end up a boat ride!