Waves in the Soup

The ocean is still there, but we are currently seeing the reign of the artificial wave – waves that surfers can actually ride, and ride for hundreds and hundreds of metres. As modern surfing is seemingly going inland, Australia has just seen the opening of its first wave pool, and Melbourne is about to claim a human-made surf lagoon via Wavegarden technology. URBNSRF are bringing the waves to a paddock near Melbourne airport, and this lagoon will be the first of three human-made commercial wave pools set to hit our shores. 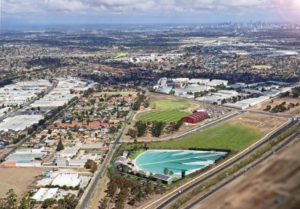 At Danterr we are extremely excited by the prospects wave pools bring to Australia in a construction sense. The Wavegarden technology is well established with facilities in the Basque region, Barcelona, and in Wales. The ace in the deck however is the design Greg Webber has been sitting on regarding his master plan of Webber Wave Pools. Webber’s is seen as a competitor to Wavegarden, but, there is more than enough room for different designs. No two surf breaks are the same in the ocean – so by that rational, all the different wave pools SHOULD provide different kinds of waves. It is not a which wave is better debate at all; rather a ‘more choices the merrier’ for most surfers including the humble author of this very blog at Danterr HQ. Webber’s wave itself is proposed to break continuously and without end. It can accommodate many different surfers at once. The wave height and shape can be altered within seconds in the oval water park. It breaks into a normal depth of water, exactly like an ocean wave, however, with a softer surface underneath, so if you do hit the bottom, it’ll be soft, not covered in rocks, or compressed sand or coral heads! Webber believes that the gradient has been too gradual on wave pool attempts thus far, meaning development of perfect gradients for different wave stages has been a real area of focus within his project. Here is Webber’s vision in video form…

As above mentioned, also shaking up the surfing scene, made-to-order Wavegarden technology, with URBNSRF in Melbourne, is just one of 20 similar projects currently in construction-mode around the world. As well as the world’s first full-sized Wavegarden ‘cove’, URBNSRF will be home to a range of pubs, shops, a gym, and festival and event spaces. A huge project 30km from the ocean, and 150km from Bells Beach. Located near Melbourne Airport, 16km north of the CBD, the $28.3 million attraction will launch sometime in 2019.

Both Webber Wave Pools and Wavegarden demonstrate a quantium leap regarding artificial wave technology. Wave pool visions have been around for decades, but only lately has the technology caught up with the imagination of surfers. Take Texas for example. The Lone Star State in the United States. Home of big hats, the South by Southwest music festival, and hundreds of thousands of guns. Despite Texas having over 450km of coastline, the best surf in the state is at NLand Surf Park, a Wavegarden-powered break located in Austin, Texas. Compared to what is coming to Melbourne and wherever Webber launches, these waves are quite weak, and offer true surfers very little apart from a certain novelty factor. 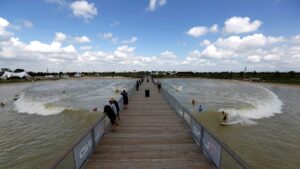 Although there is a lot of surf in Florida – that is where Kelly Slater is from after all, Florida has always had multiple wave pools including one at Disney World – the monumental fun park comprising the Magical Kingdom, Hollywood Studios the Epcot Centre, and most importantly… Typhoon Lagoon. Surrounded by a gaggle of waterslides, and aqua attractions, Typhoon Lagoon is the feature attraction of the Disney water park area: a 2.5 acre, 11.5 million litre wave pool, with small artificially pumped out waves every 90 seconds. 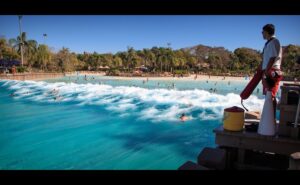 As you can see, Typhoon Lagoon is much different to other wave pools. Whereas Webber’s design allows a surfer to better than replicate an ocean wave experience by enjoying barrels, and a longer ride that usually found in the ocean – Typhoon Lagoon is one wave that breaks in a straight line. However, a great deal of engineering was still needed to complete this attraction, and 11.5 million litres of water still need to be held in place before being turned into energy.

700km off the coast of west Africa on an island surrounded by the Atlantic, Siam Park is an Oriental-themed water attraction located in Costa Adeje, a suburb of Tenerife in the Spanish Canary Islands. This is where you will find The Wave Palace. As you can see, like the wave pool at Disney World, this place is nothing like the vision Greg Webber and Wavegarden are bringing to the forefront of surfer’s minds…

Somewhere between the designs of the likes of Wavegarden and Webber Wave Pools and the weak above-mentioned waves, lies Wadi Adventure Park in the United Arab Emirates. On www.danterr.com, when we mention Dubai, we are normally talking about giant constructions that are not made to surf in – but rather the upper limits of engineering gall. As well as being home to some of the world’s most soaring towers, Dubai also houses the world’s first man-made white-water rafting, kayaking and surf facility. Despite its artificial status, Surfer Magazine, the widest read surfing magazine in history, once listed Wadi Adventure the 41st best surfing beach in the world, which, given its bearings in middle of a desert oasis close to the border of Oman, is no mean feat.

All these examples represent progression. Wavegarden and Webber Wave Pools are coming, and Danterr are hoping to play a major part in the construction of these, and any future designs that might pop up. All wave pools represent huge challenges. How to generate enough energy to propel a surfer over and over again, with no Roaring Forties, or no ocean gales, or no East Coast lows pressure systems, or no Gulf Stream Current (just a few examples) to supply said water / ocean energy? These wave pools are huge, and they need a lot of ingenious products to keep all the water running in the right directions. Danterr are experts at sourcing and supplying these products. The main product wave pools will benefit from is is Hydrotite… 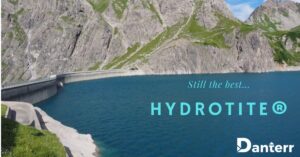 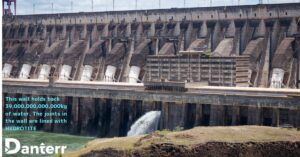 But as every wave pool functions on different technology, the list is vast as to what products each project will need as to be completed on budget and on time. Danterr are at the ready to help get these wave pools up and going because we are the water excluding (and including experts).

www.danterr.com displays our sphere of expertise. Enquire about any product anytime