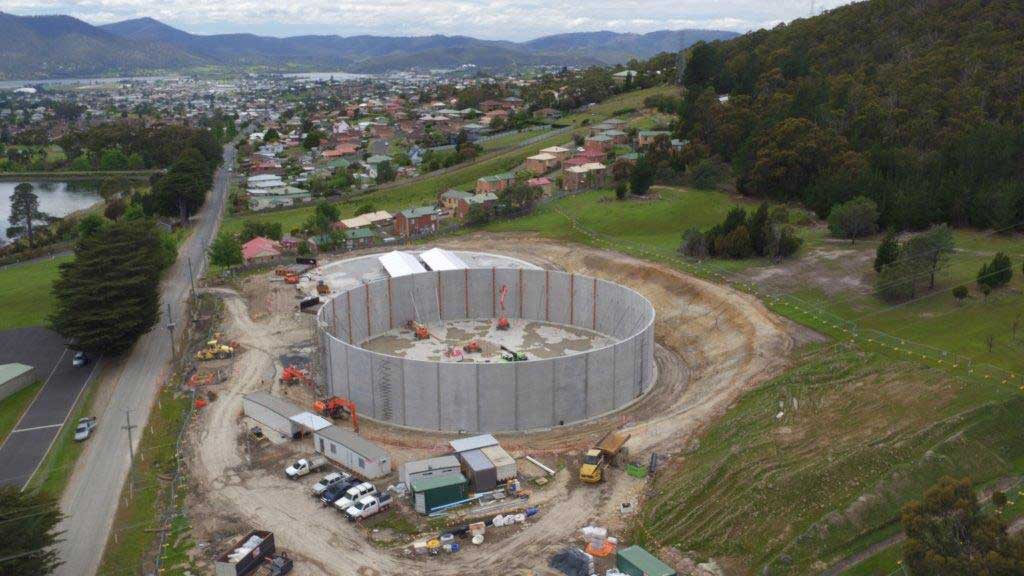 Tolosa Water Supply Upgrade Project On behalf of TasWater, Bendigo company Leed Engineering in conjunction with Danterr have constructed two new covered water storage tanks that will service the north Hobart area for decades to come. Thanks to this $24 million Tolosa Water Supply Upgrade Project, these two tanks are now the main water supply for Glenorchy which is just north of Hobart on western bank of the Derwent River. For the coming decades, these tanks will service the area’s water supply needs thus allowing for an expected population growth. An improvement in water quality will be immediately noticeable; this is due to the new water tanks being enclosed and less susceptible to contamination than the open-air Tolosa Dam, which has reached the end of its useful life. The two new water tanks are 11 to 12 metres high at their centre point, 54 metres in diameter and hold up to 20 megalitres each. A megalitre is 1,000,000 litres! That means that in this seemingly normal suburb of Hobart, 40 million litres of water will be suspended by tanks that Danterr are proud as punch to have been involved in constructing. An Olympic swimming pool contains 2.5 million litres of water. Therefore 16 Olympic swimming pools worth of water is being enclosed by two tanks – two tanks that are helped being held together by Danterr products. 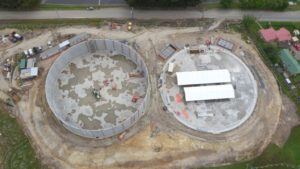 In completing the Tolosa Water Supply Upgrade Project Danterr provided a variety of Grouts and Epoxy… https://danterr.com/products/grout-epoxies/ Waterproofing products including Leakmaster, Hydrotite, and Hydrophyllic Formtie rings… https://danterr.com/products/waterproofing/ As well as a combination of Curing Compound, Rugasol MH, Expansion Foam, Fibreglass z-bar, Joint Sealant, Rubber Sheet (3mm High Butyl Rubber), Bonding Agent, Flupps / Xypex P&P Mortar and Denso Tape. As a result of this modernised approach, the areas previous water supply Tolosa Dam (until 2014) will now simply be saved as a back-up in case of emergency. However, these two tanks are revolutionary in their technology and a huge life expectancy is anticipated. The Tolosa Water Supply Upgrade Project included a new pipeline to connect the tanks to the existing water reticulation network, running from the tanks to the base of the Tolosa Dam, via Tolosa Street. This place really is a hub of water movement and retainment and is a blueprint for future Australian tank projects. When people discuss major infrastructure projects in Australia, thoughts usually tend to move towards pubic transport endeavours, roads, airports, tunnels, bridges and train tracks. However, the biggest issue facing Australia, if not the world, is the need for clean water to be moved and stored easier than is currently possible. For those in north Hobart, two giant tanks will act as daily reminders of just what can be achieved with engineering foresight and expertly sourced products. Danterr are thrilled to have been part of Tolosa Water Supply Upgrade Project. www.danterr.com displays our sphere of expertise. Enquire about any product anytime. Free Call – 1800 257 287 Email – sales@danterr.com