The Biggest thing ever built

The Great Wall of China is difficult to comprehend. It is the greatest feat of engineering in the history of mankind. For those who disagree… think about this, it is physically impossible to photograph the entire Great Wall at one time. The official length of the Great Wall is 21,196.18 km, but it is in no way built in a continuous line. The biggest section was built by the Ming Dynasty and stretches between China and the Hun territories in the north. If you were to dismantle the Great Wall and rebuild it using 21st century technology (and Danterr products!) the wall would stretch around the entire world. If you stretched it by the molecule, meaning broke it down to the atomic level of individual molecules, and stacked these molecules on top of each other (utterly theoretical!) it could reach Andromeda. What or where is Andromeda you may ask? Andromeda is a galaxy of a trillion stars that is 2.5 million lights years away. That means… right now, when we look at Andromeda in the night sky, we are seeing light in the present, that is 2.5 million years old such is the distance the light from this galaxy needs to travel to meet our eyes. Another way to put this is… if the Andromeda galaxy somehow exploded into a giant event horizon or super nova, we would not see the blast until 2.5 million years after the fact. In terms of kilometres… well, light travels at 30,000km per second, so all you must do is work out how many seconds in a year, times that by 2.5 million, then times that by 30,000. If your office calculator has enough space for this number on its display, then you must work at NASA! It is fair to say that there are a lot of molecules in the Great Wall. In fact, the Great Wall of China is the heaviest thing ever built. It weighs approx. 53 billion kilos – more than all the humans on earth combined!

Got to keep Genghis at bay!

It was during the Ming dynasty (1368-1644) that the Wall took on its present form. This is the time where the sophisticated brick structure started to take place, and the famous watch towers were redesigned to their current form. The Portuguese had found a ready market for guns and cannons in China at this time – these two items of trade are the only things China didn’t already have in abundance.  The Ming Emperors, having overthrown the Hun dominance and expelled their Mongol rulers of the North devoted large portions of available material and manpower to making sure that they didn’t return. 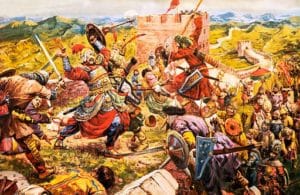 The most consumed food on Earth

Now to the most amazing fact about the Great Wall of China. Yes, there are the four million handmade bricks that make the wall strong, but the real magic comes from the mortar that holds the bricks together in wall shape. The mortar holding the Great Wall of China together is made of slacked lime, and… sticky rice! Workers under the Ming Dynasty needed a paste that would last for hundreds of years and be extra strong to hold their wall together. Someone decided to add rice to the mortar recipe one day, and bingo, they had developed the most widely used, and strongest mortar available on earth at the time.

So simple but so brilliant

It seems quite often in the history of construction that something very simple in principle turns out to be ground-breaking and revolutionary, and in hindsight, brilliant! At Danterr we are proud proponents of anything that makes concrete better. Sometime during the early part of this millennium in a lab somewhere within the European Union, macro-synthetic fibres were developed to put into concrete as an alternative to tradition reinforcement. These fibres are 50mm long, there are hundreds of them (individually) in a 50mm diameter ‘puck’, and like the rice in the Great Wall mortar mix, these fibres are placed in the concrete batch as it is being mixed. When an industrial sized slab is poured containing these fibres, there will be millions of them, even distributed, amidst the slab. The end result is the slab, or whatever concrete application one is using, is stronger than if it was reinforced using traditional steel reo. The Ming Dynasty added rice to mortar to make the Great Wall of China stronger. At Danterr, by adding hundreds of thousands 50mm fibres evenly into a concrete pour, we are doing our best to emulate the brilliant thinkers that preceded us 650 years ago in China. The simplest things are often the best!

Should you fancy more info about these ‘concrete strengthening, labour saving wonder-fibres’ please give us a call right now on Free Call: 1800 262 383 or Email: sales@danterr.com