Almost as sure as the Sun coming up – the wind will continue to blow!

Wind power is an ever-growing source of renewable energy. To continue to meet this demand, Danterr, in partnership with several major renewable energy infrastructure projects, are working tirelessly to meet this demand and ensure a clean energy future for Australia. As residential wind power generators are becoming increasingly efficient and practical, home wind power is also growing rapidly. Innovation and design in this industry is ever-growing and as the wind will never stop, we are seemingly on the cusp of an energy revolution.

The major challenge to using wind as a source of power is that in a lot of places on earth, wind is intermittent, and it does not always blow when electricity is needed. At Danterr headquarters in south-west Victoria, we don’t have this problem, but places like Indonesia for example, can experience very calm periods of weather – the doldrums of course, if we go back to our original source of wind energy – sailboats!

However, more and more resources are being used on putting these towers in places for optimum effect. At Danterr, we are experts in making sure these giant towers stay in the ground and don’t blow over! We have worked with many Australian Wind Farms and are continually sourced due to our product expertise. A wind turbine is built from the bottom up, and there is no better way of forming the foundation of the turbine than using Danterr supplied Pecafil® – a sacrificial formwork. Have a look at the below images for a better idea… 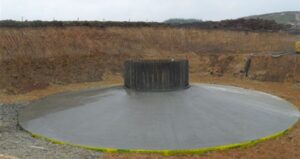 The Pecafil® holds the concrete that forms the base together, while holding the ground / earth out while using the ground / earth as extra support – genius! Using Pecafil® sacrificial formwork, these bases that are the catalyst for the giant towers you see in regional Australia, can be more secure as they can be dug deeper into the earth.

For the wind farm towers that are bolted to the concrete, shrinkage and slanting of the concrete is not an option for obvious reasons – think the Leaning Tower of Pisa! To avoid this for the bolt in model of wind farm bases, Danterr source exceptionally high strength grout – grout acts as an immovable mix between the base concrete and the tower that will be bolted to said concrete. Think of grout as a washer stopping a screw wrecking whatever it is screwed in to. The washer, or in our example, the high strength grout, absorbs the pressure… 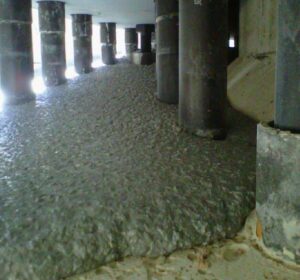 These are just two products out of a multitude that Danterr continue to supply to ensure the structural soundness of Australia’s Wind Farms. For our full range, please check out www.danterr.com

As of right now, we at Danterr are working with Coopers Gap Wind Farm…

But this is by no means the end. Australia’s energy needs are well documented, and wind is clearly a big part of Australia’s future. Danterr are excited by the opportunity renewable wind energy presents and are here to help keep any tower erect, no matter where on this sunburnt land it may be being constructed.

The Wind will Always Blow

In most advanced nations, wind power generation has doubled in recent years, with even the most conservative government forecasts calling for wind power to generate up to 20% of a nation’s electricity by 2030.

Wind of course has been used as a source of power for many millennia. Sailboats are the purest, and easily the simplest examples of how to use wind as a power source. Before Michael Faraday in the late ‘1800s came up with a way to generate electricity using magnets and copper, windmills pumped water and even grain in all the civilised world. The wind has been used to turn the blades of a rotor, which propelled grinding stones or a pumping mechanism including Archimedes screw as early as the 3rd century BCE. It is not outrageous to suggest that wind power has been converted into mechanical energy and an efficient way to perform everyday tasks for the entirety of humanity’s common era.

While the wind has blown every single day since World War II (and every day before!), wind power popularity as a form of energy has always come in and out of favour based on the internationally recognised price of fossil fuels. Following World War II, crude oil prices were very low, people had more money, and as such, interest in wind turbines waned. But when the price of oil skyrocketed in the 1970s, so did worldwide interest in wind generated energy.

Followed the oil embargoes of the 1970s, new wind turbine technology research and development was at a premium – research that refined old ideas and introduced new ways of converting wind energy into electricity. Most of these developments have resulted in wind farms, the groups of dozens of towering turbines we can see all over the world – especially near the coast in the South East of Australia. Each one of these giant turbines that make up a wind farm needs to be stuck into the ground. This is no mean feat, as the friction generated by a 150m plus high tower with a windmill on the end, due to simple gravity, obviously promotes a tower to fall over if not grounded properly. There is no better way to hold a wind turbine in place than with the use of concrete and several ingenious concrete products that make these energy sources of the future safe for the public. Wind energy is the world’s fastest-growing energy source and especially in Australia, it will power industry, businesses and homes with clean, renewable electricity for many years to come.

How to Convert Moving Air into Electricity

The wind that blows from all directions all over the planet and can be easily used to generate electricity. Turbines convert the kinetic energy of the wind into mechanical power. In the past, this mechanical power has been used for specific tasks (such as grinding grain or pumping water). A wind turbine works in the exact opposite way to a fan. Instead of using electricity to generate wind as a fan does, wind turbines use wind to make electricity. The wind blows and turns the blades that top the tower, which then spin a shaft that runs to the back of the piece of the construction that holds the blades to the tower, which feeds into a generator and makes electricity. This electricity is then funnelled down the tower and into the power grid – subject to design and location. As big and as impressive as wind turbines are, all the energy producing work is done in the top 5%. The towers are simply to elevate the blades into a higher atmosphere thus obtaining more wind. But as mentioned early, these towers need to be concreted in to ensure they don’t topple over, and this is where Danterr comes to the fore!

Why use the kinetic energy of air?

Wind energy is fuelled by the wind, so it’s a clean and essentially will never run out. Wind energy doesn’t rely on the combustion of fossil fuels; and wind turbines don’t produce atmospheric emissions whatsoever. Wind energy relies on the renewable power of the wind, which unlike oil, coal and natural gas, can never be used up.