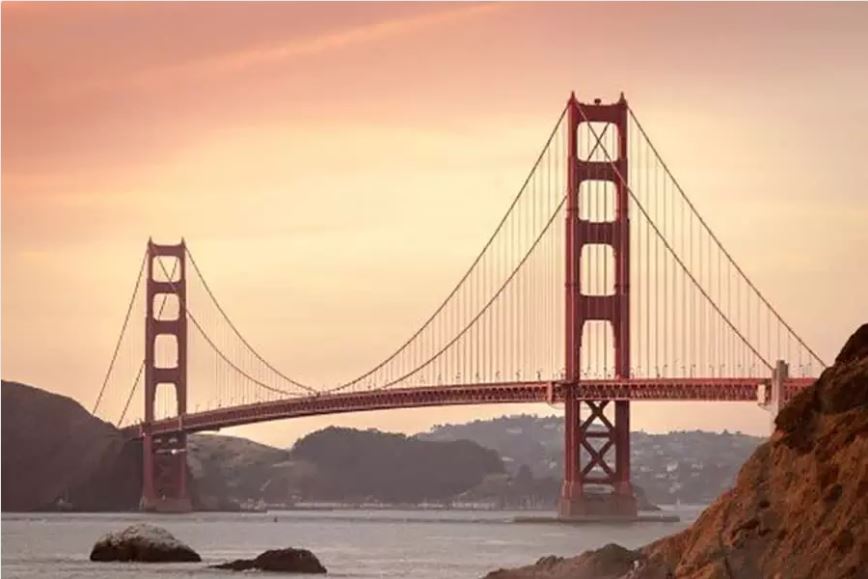 For tens of thousands of years, humans have been a species of bridge builders and have engineered structures designed to surmount seemingly insurmountable things. From a felled tree across a stream, to critically engineered cable-stay bridges across deep and uneven valleys in alpine regions, humans have been crafting a way to get from A to B for most of civilisation. Right now, in 2019, the biggest object being surmounted is Jiaozhou Bay. This body of water is now home to a 42.5-kilometer bridge that links the busy Chinese port city of Quingdao to the suburb of Huangdou. Humans have circumvented laws of physics and tamed steel, stone, lumber and vegetation, all to reach the places we need to get to, and we are overcoming bigger and more intense objects with the passing of every day. 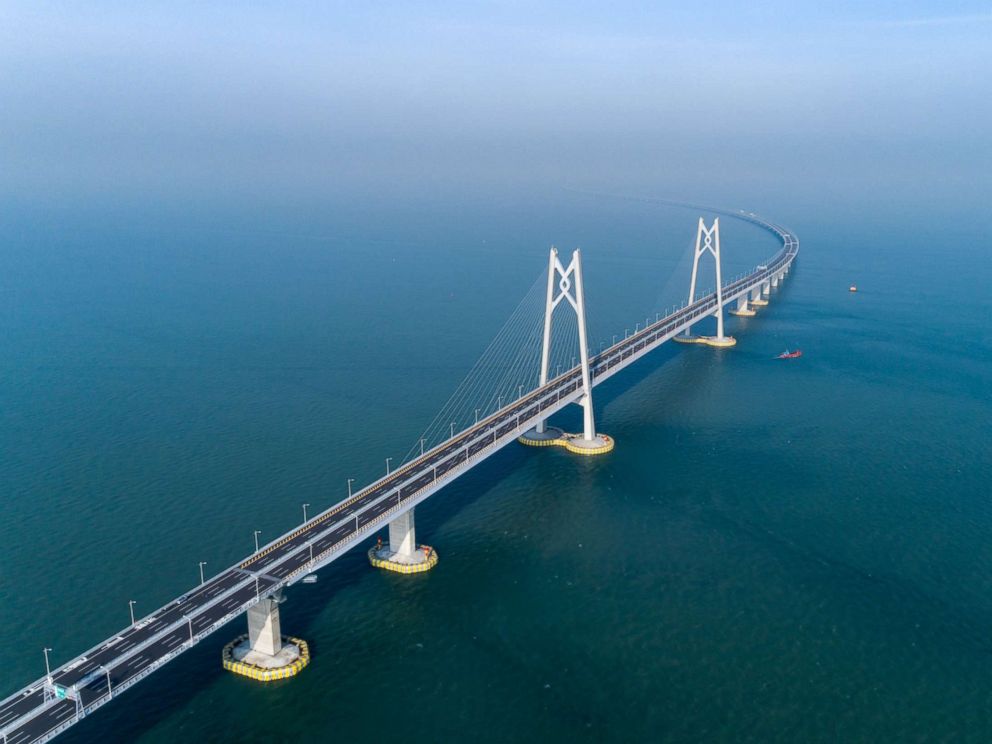 For most of the 20th and 21 centuries, bridge design and construction has entailed ingenuity only gained from many years of university, countless hours over the drawing board and the study of advanced physics. By pouring vast resources into bridge construction, engineers have reshaped the very environment in which we live and indeed what humans are capable of. As a result, planet earth is a planet of bridges and as we speak, people everywhere continue to tackle ever more ambitious constructions. In Australia, we only need only look at our biggest city of Sydney. The early settlers decided to build this city on two sides of a harbour. It is only due to the Sydney Harbour Bridge that this place can be such a metropolitan centre of commerce.

Danterr are proud to have supplied many different products to several spectacular bridges around Australia including the Nepean River Bridge, Lansdowne Bridge and Harwood Bridge. Danterr too have supplied concrete and construction products to a multitude of recently completed rail and road crossing bridges.

The key differences between these four bridge types comes down to the lengths they can cross in a single span – the distance between two bridge supports. Bridge supports may take the form of columns, towers or even the walls of a canyon or a valley. 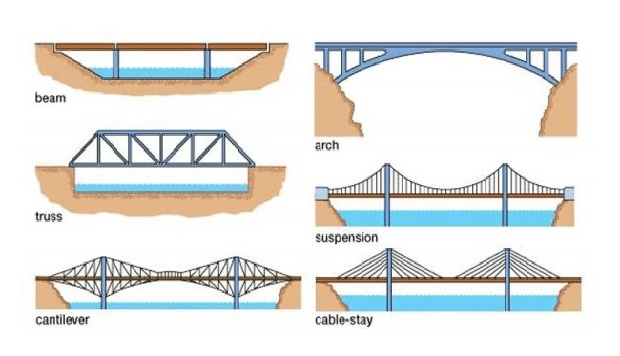 Regardless of the structure, every bridge must stand strong under the non-negotiable laws of physics.

An arch bridge can span a greater distance than a beam bridge. A suspension bridge can stretch over a distance seven times greater than that of an arch bridge. These are undisputed facts and are determined by the way each bridge type deals with the important forces of compression and tension.

When a tug boat is towing a ship, the rope connecting the two vessels undergoes tension. This force also acts on bridge structures, resulting in tensional stress. In opposite fashion, when you push down on a coil of rope, you compress it and shorten its length. Compressional stress, therefore, is the opposite of tensional stress.

Compression and tension are present in all bridges, and both forces are capable of damaging part of the bridge as varying load weights and other forces act on the structure. Bridges are generally built to handle these forces without buckling or snapping. Buckling occurs when compression overcomes an object’s ability to endure that force. Snapping is what happens when tension surpasses an object’s ability to handle the lengthening force. Rope will buckle under compression and snap when too much tension is applied. 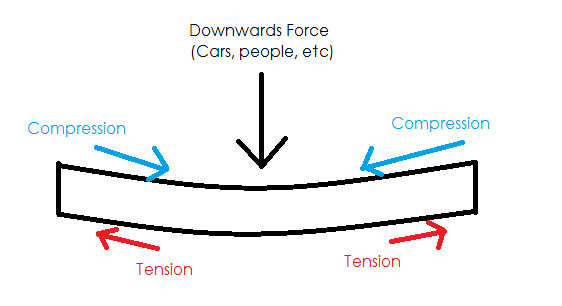 These forces need to either be dissipated or transferred. With dissipation evoked in bridge design, the force will be spread out evenly over a greater area, so that no one spot bears the concentrated brunt of it. In transferring force, a bridge through brilliant engineering and design moves stress from an area of weakness to an area of strength. From a roadway to a pillar for example.

Torsion keeps the engineers who design suspension bridges up at night because it occurs when high wind causes the suspended roadway to rotate and twist. The natural shape of arch bridges and the truss structure on beam bridges protects them from this force. Suspension bridge engineers don’t have this luxury and must resort to deck-stiffening trusses that effectively eliminate the effects of torsion.

In suspension bridges of extreme length however, the deck truss alone isn’t enough protection. Engineers conduct wind tunnel tests on models to determine the bridge’s resistance to torsional movements. Armed with this data, they employ aerodynamic truss structures and diagonal suspender cables to mitigate the effects of torsion.

Shear stress occurs when two fastened structures are forced in opposite directions. Shear force can literally rip bridge materials in half. A simple example of shear force would be to drive a cricket stump into the ground about 20cm and then apply force against the side of the upper portion of the stump. With enough pressure, one would be able to snap the stump.

Resonance is the vibrational equivalent of a snowball rolling down a hill and becoming an avalanche. It begins as an inexplicit small vibration such as wind buffeting a bridge. The vibration can increase drastically, sending destructive, resonant vibrations traveling through a bridge in the form of torsional waves. Wind isn’t the only threat; in the past, when a marching legion or army crossed a bridge, the soldiers have needed to ‘break step’ so that their rhythmic marching formation would not start resonating throughout the bridge. A large group of marching troops such as Germany or the Soviet Union deployed over Europe in ‘1940s, marching at just the right rhythmic formation could set potential bridge-collapsing vibrations into motion. In order to mitigate fully the resonance effect in a bridge, engineers incorporate dampeners into the bridge design to interrupt the resonant waves and prevent them from growing. Resonance can also be halted by giving the vibrations less room to run wild. If a bridge boasts a solid roadway, then a resonant wave can easily travel the length of the bridge; but if a bridge roadway is made up of different sections with overlapping plates, then the movement of one section merely transfers to another via the plates thus generating friction – resonance’s mortal enemy. Enough friction needs to be generated to change the frequency of the resonant waves. Changing the frequency prevents the wave from building.

For information on the Nepean River Bridge, please see https://www.danterr.com/blog/portfolios-view/nepean-river-bridge-easy-principle-elegant-essential/

To check out some of the other crowning achievements in bridge construction world-wide, please see… http://www.historyofbridges.com/famous-bridges/list-of-famous-bridges/